Typical infrastructure power output for high power two-way radio systems are around 25-100W. In fact, one of the design philosophies of two-way radio technology is to maximize the coverage area so that as many two-way radios can be communicated with within a given site. This philosophy results in a minimizing of the number of sites.

As a consequence of the high-power radio transmitters, the two-way subscriber radio – the portable – must operate with a much higher power level in order for it to talk back into the infrastructure (talk-in).

Typical power levels are about 1-5W. In contrast, mobile phones are typically 0.6W. Because the cell sizes are larger for two-way radio systems, the talk-in range of the portable radio must be compensated with higher power output…up to a point.

Industrial design and operating requirements constrain the radio design to a slightly larger physical form factor, resulting in increased weight, than commercial-grade products. Consumer products and commercial-grade products, such as cellphones and commercial-grade two-way radios, are not designed with these kinds of considerations, so their mechanical designs allow for smaller, thinner, lighter housing designs. The difference is clear: try dropping your cellphone a few times in your office. It will break. Ruggedized industrial-grade two-way radios do not break under normal conditions in industrial
environments.

If the radio is designed to be submersible (yes, actually going underwater), then the mechanical design must also be made slightly larger to cater for special internal sealing in every possible area of water entry. Making a radio that is submersible or workable in a pressurized water environment, like fire suppression operations require more rigorous sealing against water pressure rather than just water entry. This requires special silicone sealing, ultrasonic welding, and high strength bonding materials. All of this requires additional space to add all of this for a good, tight seal.

Another factor keeping the radios from shrinking further are the customer demands for more unique features that cell phones don’t have. For example, two-way radios can be equipped with government grade encryption for voice transmissions that require the highest levels of security. This kind of requirement generally requires hardware encryption circuits, and this adds more circuitry and hardware inside the radio. If cellphones had to meet this kind of sophisticated user requirement, cellphones would be bigger than they are today. Indeed, the more ruggedized the radio is required to be, the larger and heavier the mechanical design of the housing must be for the product. There are a few ruggedized cellphones in the market today and they are larger and bulkier than the majority of cellphones on the market.

It is hoped that this white paper has answered the question of why portable two-way radios are larger than cell phones. The basis for current two way radio design is driven by end-user operational requirements, the environment in which two-way radio must be used in, and the limits of technology. As a leader in two-way radio technology and winner of many technical design & innovation awards, Motorola continues to invest in a wide variety of supporting technologies that contribute to the next generation of digital two-way radio subscribers. Over many years, Motorola has led the two-way radio development with ever-increasing power and capabilities, where a seemingly simple, unsophisticated product are now evolving into an advanced intelligent device that will one day allow for the convergence of voice, data, and video that will support the various communications functions of integrated command & control, workforce mobility, video security, interoperability, and maybe one day even as a extension of a mobile broadband network. 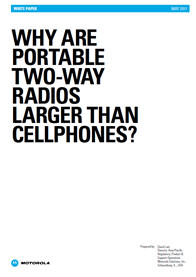 Talk to us about your MOTOTRBO requirements today – 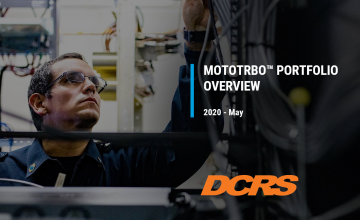